If there was one facility on campus that truly encapsulates the growth of Greenhill, it would have to be the athletics facilities. What started as one building that housed the entire Physical Education & Athletics Department has transformed into an entire state-of-the-art complex that rivals many collegiate athletics programs. In 1969, Greenhill took its first big step into athletics with the opening of Cox Gymnasium, creating its own facility for the first time in school history. Seating 762 and sporting a state-of-the-art Tartan floor created by the 3M Company, the facility was a dream come true. No longer would Greenhill teams be forced to practice and play strictly away from campus, but now they would be able to have their very own home games. With over 60 percent of the student body in the Upper School participating in varsity athletics, former Head of Upper School George Young proudly declared to the Board of Trustees that "one of the most important activities in which a youngster can become involved is athletics. I believe that we should do everything in our power to foster this idea." However - even Young could never imagine that this one singular building on campus would turn into an entire fully-furnished facility. Greenhill would eventually renovate Cox Gymnasium over the years, but it was the beginning of "The New Century Campaign" in the late-1990s that would truly transform the campus. In 1999, Greenhill opened the doors of the new Phillips Family Athletic Center, named for Dan & Merlene Phillips, who gave $5-million to the school for the new sports complex. Located near the western edge of campus between Cox Gymnasium and Hornet Field, the new 55,000-square-foot athletic center was designed by renowned architect Ted Flato of Lake/Flato with the help of Bill Hidell of Hidell & Associates and Alan Fujimori of Sasaki & Associates. The new complex would feature a six-lane natatorium (Ginsburg Natatorium); dedicated areas for weightlifting, fitness training, aerobics and wrestling to go along with new courts for volleyball and basketball. On the south end of athletic center, looking out onto the football field is the Tom Perryman Athletic Center, featured a Wall of Fame dedicated to those Greenhill graduates who have gone on to participate in varsity sports at the collegiate level. As part of the overall construction, Cox Gymnasium was renovated with a new floor and interior paint while updated exterior facade. One of the final phases of "The New Century Campaign" was the completion of the Deason Family Tennis Center, which includes 10 lighted tennis courts along with a pro shop, and is rated as one of the best complexes in North Texas. In addition, an concession stand that founder Bernard Fulton once commented, "Good gracious, your concession stand is larger than our original school building was!" In 2014, Greenhill expanded its athletics operations with the opening of two new fields located on the northeast corner of campus. The new fields - Jennifer Goodnight Maalouf '86 and JJJ Frankel Field - include two regulation-sized soccer fields that are used for a varsity of sports, including field hockey, soccer and lacrosse as well as Middle School softball and baseball. In addition, a Pedestrian Bridge was added to help the facility connect to the rest of campus as well as an Athletics Pavilion. 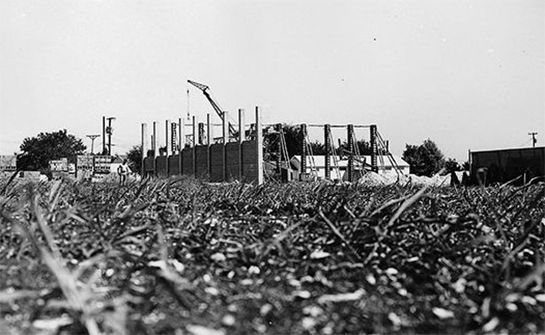 The construction of the Cox Gymnasium, Greenhill first athletic facility. 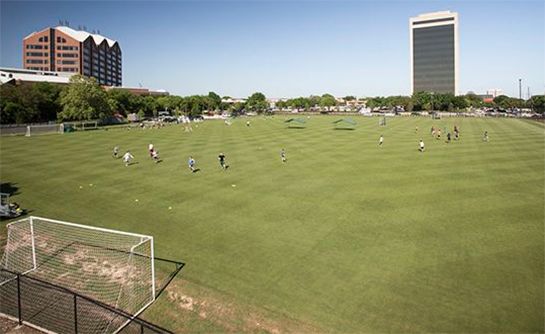